When going home to Denmark for Christmas, my 7-year-old nephew begged me to visit his class and talk about Animals. Soon his older brother (12) and sister (10) did too.

As the date came closer, I started to get nervous. Is talking to kids the same as presenting to adults? What if I don’t catch their attention? What if the lecture turns into pure chaos? These were just some of the questions going through my mind. Although I am used to speaking in front of crowds (and crows) mostly in zoos and often supported by an animal behind me or on the arm, I’m not an Educator… What more my dear sister thought it was a grand idea to call the local island newspaper…

However, as I often talk about how important Environmental Education is, here I was!

My first lecture with the youngest class was on Spiders. With a few pictures (such as an oversized Heteropoda with a frog in its jaws), several fun facts and 20 out of 22 kids calling me “Uncle Simon”, I managed to make almost everyone in the room appreciate jumping spiders by the time I was done (not sure about the teacher though). 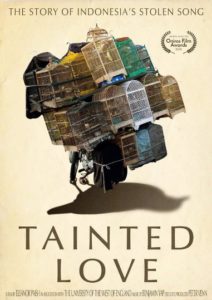 With the 10 and 12-year olds, I decided to talk about the Silent Forest campaign. I introduced the subject with the great film Tainted Love by Eleanor Paris and in my backhand the educative materials from the campaign: the origami sheets from Chester, the coloring sheets, the educative panels in different languages as well as masses of pictures, videos and PowerPoints ready to go.

I can truly say I had never been asked so many questions! I only managed to show a fraction of my materials and still we spend most of the next scheduled lecture (math) talking about Songbirds. Questions turned into a discussion and indeed, it became a dialogue more than a lecture.

Many of the things they asked I had never even thought about before. But with pictures of the main species involved and some basic facts, I could quickly provide graphic answers which seemed to satisfy the class.

I was surprised how important facts were for the kids. “How much does a White-rumped Shama cost – How much is that in crowns”, “How many people live on Java”, “How many Hill Mynas are left in the wild”, “How big is a Sumatran Laughingthrush”. I found it was important to compare the amounts and sizes to something they already know, the value of a hotdog or a house or the size of a Common Blackbird. Other questions circled around the hopelessness of the situation. “Why can we just not buy all and set them free”, “My grandpa have two Canaries can we send them to Indonesia so they don’t catch wild ones”, “Why doesn’t the police do anything”, etc. I could painfully feel the frustration if I could not provide an answer with a pinch of hope in it.

Although no one called me Uncle Simon there (not even those who are technically entitled to do so), all the children were thinking about Songbirds and how to save them during at least these 90 minutes. The newspaper reporter was also clearly impressed as she managed to fill a full page with this experience about the Silent Forest campaign.

Altogether, my slight apprehension of the lecture turned into a lot of hope and a renewed sense of the importance of what we do in Zoos. It is crucial to keep showing kids and the public in general what is happening in the “world of the animals” … in our world.

Both classes are now still working with the Silent Forest materials and one of them convinced their music teacher to make a song “just like in Chester zoo”.

Imagine a lecture hall full of people eager to learn more about the Asian songbird crises and the EAZA conservation campaign… the dream of every campaigner, the dream of every educator. On the evening of 17th of January 2018, this dream came true in Royal Burgers’ Zoo, the Netherlands. 260 listeners showed up for an evening lecture on tropical birds and the campaign. 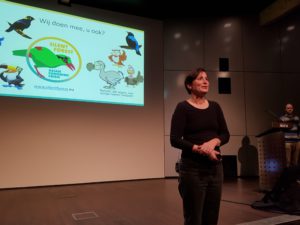 Head Zookeeper of the world-famous Bush, Christiaan Luttenberg, warmed up the crowd with his talk on the challenges that zookeepers face in the husbandry of often rare tropical birds in a huge mixed enclosure like the Burgers’ Bush. It is the place where we keep different campaign target and focus species, like the White-rumped shama, the Asian fairy bluebird and the Blue-crowned laughingthrush. Then I was giving a talk on the campaign background, the conservation projects the campaign will collect money for and the activities we are going to enrol in the zoo for the campaign. 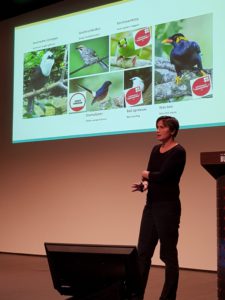 After the presentation, one of the listeners, a passionate birder and world traveller came up to me and said, ‘Well, I did already know that there is a bird crisis going on in Asia, but I had no idea it was this urgent to act.’

As we also sold buttons and fridge magnets with the campaign logo that evening (participants can get the mall for those buttons in the resource section of the website), we made already our first 101 Euro for the campaign!

Three smugglers were arrested on Tuesday the 16th of January 2018 in Melaka, Malaysia, by the Malaysia’s Maritime Enforcement Agency. Unfortunately, the authorities intercepted the fleeing boat after the men had thrown overboard 300 birds. Only three of them could be saved from drowning. According to a press statement, the birds were likely smuggled over land from Viet Nam to Thailand before heading to Indonesia for sale on illegal markets. The species are currently being identified but most of them are believed to be Songbirds.

This unfortunate incident is another reminder of the significance of conservation campaigns, such as Silent Forest, launched last September by the European Association of Zoos and Aquaria, TRAFFIC, BirdLife International and the IUCN Asian Songbird Trade Specialist Group. It should encourage us all to work twice as hard to inform on and fight against the trade of these iconic species.