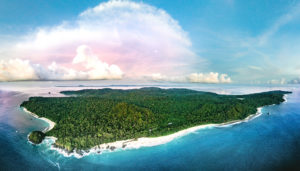 This incredible drone shot shows Bangkaru Island from a new perspective. At the upmost capabilities of Alex Westover’s drone, this photo was captured as a last-minute decision just before leaving the island.

‘It was such a last-minute shot that I almost didn’t end up getting. I’m glad that didn’t happen!!’

In December 2019 a team of international wildlife photographers ventured to Bangkaru to capture the biodiversity and beauty of this wild and remote island. When we say remote, we mean remote. To get to Bangkaru, one must travel from Medan on mainland Sumatra – already quite remote – to Simeulue Island via small island-hopping plane. From Simeulue it is then an 8-hour boat ride, or at least it should be. On this occasion one of the boats motors failed, making the journey 12 hours.

‘Getting to Bangkaru is an adventure in itself. 14 hours from Australia, 3 hours in Medan, another flight, 12 hours on a boat and we made it! And it’s all so worth it to be in a place as beautiful as Bangkaru.’

None of this is easy, especially not with a camera crew and all the gear. After offloading the gear from the boat in a

sheltered bay, the equipment had to be carried through the jungle to the camp spot. A makeshift basecamp was set up on one of Bangkaru’s beaches and the team spent a week photographing and filming Bangkaru’s spectacular landscape and wildlife. The video footage of this expedition can be seen here on EcosystemImpact’s website.

There truly are very few places left in the world as unaltered by humans than Bangkaru. This does not however, mean that Bangkaru’s wildlife is safe. In fact, far from it. Before setting up the Bangkaru Ranger Programme, close to 100% of turtle eggs were poached and it is estimated thousands of birds captured of the pet trade.
Ranger programmes work because the ranger’s presence and ability to enforce the law deters poachers. In 2016, EAZA, EcosystemImpact and partners Forest, Nature and Environment Aceh (HAkA) and Balai Konservasi Sumber Daya Alam (BKSDA) successfully implemented the first capture and legal prosecuting of poachers in the area. This action showed local communities we are serious about conserving Bangkaru’s wildlife and we are happy to report that since this intervention there has been no recorded turtle egg poaching and a noticeable reduction in bird poacher activity.
EcosystemImpact and EAZA’s Silent Forest campaign is continuing to develop and strengthen our ranger presence on Bangkaru. We are also working with local communities to bring environmental education to schools to heighten environmental awareness and further reduce poaching.