The Bali myna (Leucopsar rothschildi), so emblematic of the island it is endemic to, has been reintroduced to Bali Barat National Park over the past 30 years in attempts to re-establish a wild population. The population of this highly sought-after songbird was decimated from the mid-20th century onwards by trapping to supply the insatiable demand from the cagebird trade. In support of latest reintroduction efforts, an ecological monitoring project has been undertaken, its goal being to gather detailed information on the wild population and share this with the national park for the benefit of important ongoing conservation activities. Such monitoring can provide valuable insight regarding the species’ ecology, demographics, dispersal, and long-term population viability. Much of the data required for this analysis have been collected over the past 12 months, but fieldwork is still ongoing. Here, we provide a summary of the monitoring work we have been carrying out.

Population Distribution and Abundance
For the past 12 months, Tom and research assistants Panji Gusti Akbar, Muhammad Arif Romadlon and Aldina Rahmadhani, mapped the occurrence of Bali myna within and surrounding Bali Barat National Park. Well over 1,000 encounters with Bali myna were recorded, giving us a good idea of where birds spend their time, as well as daily and seasonal variation in habitat use. With this information, we will be able to determine which areas are most likely to support a range expansion, and areas outside the national park that birds might be expected to disperse to in the future.

Habitat Preference and Suitability
To complement the bird occurrence data, we undertook an extensive park-wide habitat survey, recording habitat structure and vegetation characteristics in 10 m radius plots. Muhammad and Aldina, recent Indonesian graduates with a primary interest in botanical field research, joined the project and after an instructive week with Bali Barat’s botanical expert, Bapak Putu Yasa, amassed an impressive dataset of >700 habitat plots across the national park and in the area immediately surrounding it. These data will be used to generate an up-to-date supervised habitat classification for Bali Barat National Park and its surrounds, as well as to examine more detailed habitat associations of Bali myna.

Productivity
Nestboxes have been installed at each Bali myna release location to offer birds safe and easy access a nesting site. 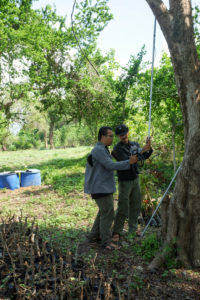 This has the added benefit of enabling relatively straightforward monitoring of breeding productivity, although it is still demanding work that takes time and patience throughout the breeding season, and an in-depth understanding of behaviour to ensure disturbance to birds is minimised. Mas Untung, Andri and Sasmita have taken on this task of detailed monitoring of the nestboxes and natural nest cavities used by Bali myna in close cooperation with national park staff. They are collecting extremely valuable breeding data, and with the help of an endoscope (or “snake camera”), have been able to collect some of the first definitive data on clutch size, numbers of chicks, and nesting success from wild birds.

This work will continue until the end of the breeding season, thought to be around May/June, although some birds may actually continue to breed after this period, one reason for this important work to be a continual effort.

Survival and Movement
Ever since the first aluminium ring was attached by Hans Christian Cornelius Mortensen in 1899 to another member of the Sturnidae, the European starling, modern-day bird ringing has helped us determine how long birds live for and where they go. 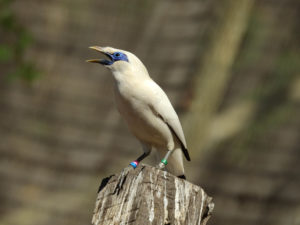 The use of coloured plastic rings now means that birds need not be re-caught to know their identity, reducing disturbance. Using these methods in Bali Barat on a sub-sample of the Bali myna population has helped us to understand the movement of birds between release sites – indeed, we have confirmed that birds are moving more than we expected! Furthermore, through continual monitoring and repeated registrations of the same birds over time, we are able to measure the birds’ apparent rate of survival, an important metric required to help build a population viability analysis.

With the end of the current breeding season will arrive the final data required for the planned analysis to begin and for results to be published and shared with the national park, project partners, and wider scientific community. Completion of this initial analysis is anticipated by July 2020.

This work has been made possible thanks to funding from the EAZA Silent Forest campaign, and Tom also receives funding from Chester Zoo and MMU as part of his PhD.