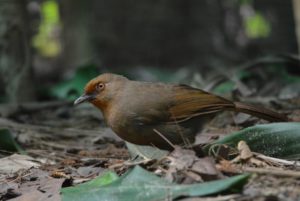 Esa (“the only one” in Indonesian) is a Rufous-fronted Laughingthrush from the subspecies of Central Java. Although few individuals of the subspecies from West Java still remain in remote locations, the subspecies from Central Java was completely decimated by the intensive illegal catching for the cage-bird trade. This illegal trade is touching all songbirds in Indonesia that are kept in small cages in front of people houses so they can “enjoy” their songs or increase their social status by having a rare bird to show.

Esa arrived in Cikananga Conservation Breeding Centre (CCBC) in September 2012 from the biggest bird market of Java, situated in Jakarta. The CCBC team quickly identified this female as Central Java subspecies and large efforts were implemented to find new companions for her and start a breeding programme to counteract the loss of this valuable subspecies. Whereas few Rufous-fronted Laughingthrushes from the West Java subspecies were found and breeding programmes could start, no individual from the subspecies of Esa was found until now. It is thought that this subspecies is already extinct in Central Java and, since Esa, there is no evidence of another individual in captivity (private owners, centres or bird markets).

Until now, Esa is kept in CCBC under the good care of the experienced team. Unfortunately, she doesn’t have a mate but can enjoy time with young birds from the West Java subspecies until they reach their sexual maturity and have to be removed from her (to prevent hybridization).

This brown and secretive bird received few attention in the past and the Cikananga team is sad to observe daily the last specimen of its kind that will drive the subspecies to the complete extinction once Esa will pass away.

Actions to preserve the Indonesian songbirds must be implemented right now to prevent other species becoming the new “Esa” and being driven silently to extinction.