The Silent Forest campaign is excited to announce an exclusive European singing competition, open to nurseries, schools and other singing enthusiasts!

Every single day, songbirds are being taken in huge numbers from the forest of Southeast Asia to be traded as pets or to take part in singing contests. Many of those birds do not live longer than a few days in the tiny cages they are kept in. Some of the most sought after species are now at a great risk of extinction, and on some islands they have tragically disappeared already and are unlikely to ever return. It is time to act now, before the forests fall silent forever.

Join the Czech children and make a difference by raising awareness of the scale of the crisis by singing for songbirds! 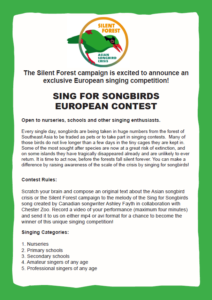