Dr. Bas van Balen, the lead author of the study, explains that “Fifty to hundred years ago the Javan Pied Starling was one of the commonest birds in Java’s farmlands. Now, no wild birds are known to survive in the wild. Just a few occasional escapes can be seen.”

An estimated more than 1.1 million birds are held in households in Java, all stemming from commercial enterprises 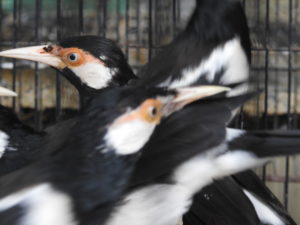 across the island.  To our knowledge, there is no other known case where a bird species has become extinct in the wild but can be bought openly and legally in commercial outlets within its former range.

The two most important causes of extinction are trapping for the songbird trade and the use of pesticides in the agricultural fields which are believed to have greatly depleted the topsoil food resource of the species. The species is specialised for ‘prying’, a foraging technique which allows them to feed on earthworms and other soft-bodied invertebrates.

The Javan Pied Starling is a recent (2016) taxonomic split from Asian Pied Starling Gracupica contra. The former has disappeared almost entirely unnoticed from its native range in Java and Bali, Indonesia; in a circumstance that Dr. Nigel Collar of BirdLife International and co-author of the study describes as “unique in bird conservation”. He explains in almost disbelief that “for a species with a high tolerance of disturbed habitats, especially agricultural areas, and which used to be found in large roosts inside city limits, the current situation is truly extraordinary. Here is a bird that is extinct in the wild but which you can find quite easily in bird shops and people’s homes. There is no other case like this on earth”.

Bas and Nigel point out that their study is another grave reminder of the impacts of the ‘Asian songbird crisis’, brought about by the large-scale trapping of wild birds throughout Indonesia, particularly Java and Sumatra, to meet the demand for domestic pet bird trade.

The IUCN Species Survival Commission Asian Songbird Trade Specialist Group (ASTSG) identifies 44 bird species as heavily impacted by songbird trade. Of these, 21 are already listed as globally threatened, of which 19 inhabit Indonesia. Nine critically endangered species include the Javan Pied Starling. David Jeggo, Chair of ASTSG explains that “Most of these species were ‘uplisted’ during the 2016 IUCN Red List update highlighting that the impacts of wild harvest are now glaringly visible as rare species continue to decline to the point that many are disappearing from their wild habitats.”

Interestingly, the Javan Pied Starling is not popular in songbird contests that are widely thought to have caused the decline of many songbird species. The trade in this species is fuelled by its popularity as a pet caged bird – a long-established Indonesian hobby with profound cultural roots.

BirdLife and Burung Indonesia (BirdLife in Indonesia) aim “to bring to an end illegal, unregulated and unsustainable trade in birds”. This means clamping down on trade that threatens the populations of wild-caught birds. Burung Indonesia is encouraging songbird keepers to shift the balance of songbirds’ provenance towards captive-bred stock that may help the status of birds like starlings and bulbuls, which breed readily in captivity. 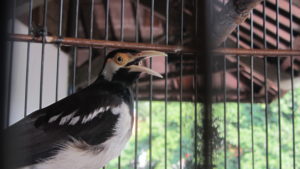 However, for a species already gone from the wild, conservation is far more complex than stopping trade and protecting habitats. Fortunately, the new study provides clues. The authors reviewed all information (published and unpublished) they could find to provide an evidence base for any future endeavour to re-establish a population in the wild. They found that the species was once widespread in at least 168 localities in Java and 13 localities in Bali. Nine localities were also reported in eastern Sumatra.

In an emergency online meeting called to discuss the conservation of the Javan Pied Starling in early March this year, conservation biologists, all linked to the IUCN Asian Songbird Trade Specialist Group, broadly agreed that a captive population needs to be assembled for conservation breeding and safe release into the wild.  That population needs to be as large as institutional and financial capacity in Java will allow, to increase the chances of capturing the genetic diversity in the commercially held stock. A number of institutions in Java may be able to help with the establishment of a conservation breeding programme.

Jochen Menner of Prigen Conservation Breeding Ark explains that “Acquiring genetically pure birds for captive breeding will be an issue because there are a number of mutant plumages and possibly even hybrid individuals in captivity. However, that shouldn’t stop us from trying”.  Prigen has offered to coordinate the captive breeding effort and where work has already begun.

There is also room to raise awareness about the detrimental impacts of pesticide use on birds in agricultural environments.  Simon Bruslund, Head of Conservation, Marlow Birdpark points out that “pesticides are believed to have greatly depleted the topsoil food resource of the species. The species is specialised for ‘prying’, a foraging technique which allows them to feed on earthworms and other soft-bodied invertebrates.”

“The plight of the once common Javan Pied Starling reflects the need more broadly to encourage the sustainable management of grasslands and agricultural landscapes across Asia which are home to many species which are either threatened or are likely to become so.”  – says Mr. Vinayagan Dharmarajah, Regional Director of BirdLife International (Asia).

Research is urgently needed to identify sites where birds might be released in future and where they will be safe from trapping and the influence of pesticides on their food supply.  There is a real need to “create safe havens,” says Stuart Marsden, Professor of Conservation Biology at Manchester Metropolitan University in the UK and vice-chair for field research in ASTSG.  Stu explains that “searches are still needed in case there are a few places where a small wild population possibly survives. But we shouldn’t raise our hopes too high. There have been no records of the species in the wild since the start of the century.”

Mr. Adi Widyanto, Head of Conservation and Development, Burung Indonesia sees songbird trade and keeping as a challenge to biodiversity conservation and sustainable development but also an undisputed economic opportunity for those involved in the value chain. He later adds “Considering the scale of the issue, there is a need to develop conservation actions that are inclusive. This would mean engaging the relevant actors in the sector to work out the most optimum solution that captures diverse interests.”

“Safe havens in Indonesia will only work if communities are fully engaged and supportive” argues Dr. Anuj Jain of BirdLife International who also co-chairs the ASTSG’s community engagement group. BirdLife has successfully implemented an “Ibis rice” scheme engaging over 250 farmer families that protect ibises in Cambodia. Anuj is hopeful – “Maybe one day, we will have “Javanese Starling rice” – rice free from pesticides where communities are incentivized and where eco-tourists and Javan Pied Starlings roam free.”

The IUCN SSC Asian Songbird Trade Specialist Group (ASTSG) was established to prevent the imminent extinction of songbirds threatened by unsustainable trapping and the trade in wild-caught passerines.  In addition, it seeks to address the impact of the trade and to find solutions through which the growing threat to an ever increasing number of songbird species can be reversed and improve the conservation status of all species involved.

Although there are various institutions working on songbird conservation issues, having a coordinated effort under this Specialist Group will create a synergy by bringing subject matter experts from different fields together for the common purpose of Asian songbird conservation. Given that the threats facing songbirds are multi-faceted and require a range of different yet coordinated strategies, the Specialist Group will facilitate this coordination. ​