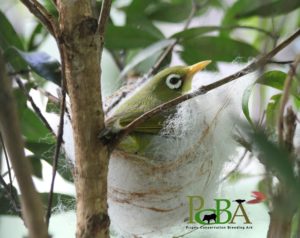 in the process of being scientifically described. For several years there have been concerns about the bird’s conservation status and the Silent Forest pre-selected project partner Prigen Conservation Breeding Ark (PCBA) have been precautionary breeding the pale billed white-eye species in their facilities since 2019. The PCBA curator Jochen Menner spend his holidays on the Island of Wangi-Wangi to gain a better picture of the species status for himself. He has kindly shared his disconcerting trip report with us which suggest the species is perhaps not as widely distributed in secondary habitat as we had hoped and that more research is urgently needed on the ecology of this “new” species.