Sparrows are in serious decline in Europe, not because of the Asian Songbird Crisis or trade but because of their decreasing access to food and nesting grounds near Human settlements.

In Germany, the populations of House sparrows (Passer domesticus) have declined by 30% on average. In some cities, it is even by more than 50% over the past 25 years.

Zoos often provide better living spaces and the ground of zoo’s sometimes holds above average densities of Sparrows similar to the way populations were several decades ago. 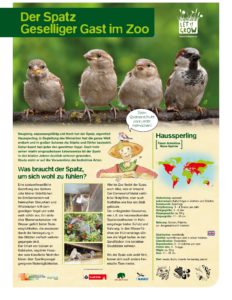 Together with local environmental authorities, the local birdlife partner Cologne Zoo started a very successful Sparrow project last year as a part of the previous EAZA campaign “Let it Grow”.

A photo competition, an exhibition about sparrows, plantings in schoolyards, building nesting boxes and a children’s book about the life of a Sparrow are some of the activities achieved. The project was recently certificated as UN project on Biodiversity.

Wouldn’t it be great if more zoos presented their projects for Sparrows next year on the 20th of March?