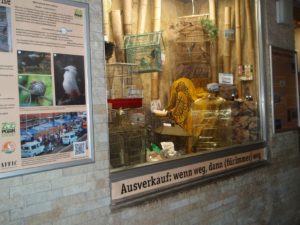 A few weeks ago, the opening speech about the Asian Songbird Crisis and the EAZA Campaign was given by curator Heike Maisch at ZooPark Erfurt for the launch of their new exhibition and already 252,50 Euro were collected for the Campaign! A great start!

The special exhibit located in the old elephant and rhino house opened its doors on the 1st March.

Two artificial forest areas have been designed and painted by Roy Bäthe (the name rings a bell? You might have seen some of his bird paintings here) and Heike Maisch for the exhibit. 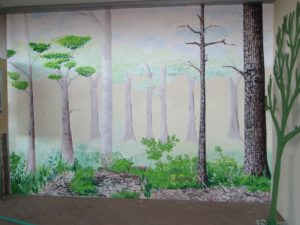 They are now empty of birds. Kids and groups will create their own bird pictures during several special Silent Forest event days. Together with the young artists we will bring those birds into the empty exhibit forests. This is meant as a symbol of the aim of the campaign: to bring the birds back into the wild.

Hopefully, at the end of the campaign, both forests will be full of birds!