Copenhagen Zoo employs several people working on various projects in Indonesia. One of them is Hariyawan Agung Wahyudi, aka Yudi, working on the Banteng program in Baluran National Park. 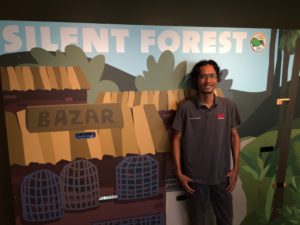 Yudi is 40 years old, he grew up in Central Java, Indonesia. Although his focus for Copenhagen Zoo is Banteng, he is passionate about birds, like many Indonesians, and has been around them since its youngest age. With a background of conservation biologist, Yudi loves observing them and really knows his species.

He will tell us his story from childhood to now and share his passion of Songbirds.
Discover the first part of his story today.

“I was born in a traditional family in a small town named Kudus, in Central Java province, Indonesia. As many other household in Java, my family had many song birds in cage. As I remember, my father had 29 cages with different species in every cage. I had an obligation to take care of those birds, provide food, water, clean the cage and sometimes give them vitamins to make them sing happily. Our house was filled with birds song every day. Sometimes, my father took me with him to bird markets to see if there is any interesting song bird to complete our collections.

Hunting birds was also a game when we were children. Every day after school, we brought our catapult, exploring sugar plantation or following riverbanks, to shoot birds.
If we were lucky and found a nest of spotted doves full of eggs, we took it home and asked our mother to cook it. If she was too busy, we usually had a barbecue party with the gang.
Sometimes the nest had chicks inside, we then took them home and nurse them until they were able to fly. We then released them in the wild. Honestly, maybe one out of 50 survived and were able to be set free. But for us, kids, taking care of the birds made us happy.

This was in the 80s, while so many bird species were still easy to find everywhere in Java. In those times, we still had huge open areas such as paddy fields, gardens with trees, as well as wetlands surrounding our village.

In the past 25 years, many open areas have been converted into settlements. The high demand on new houses and other properties, has been compromising the birds’ habitat.
Unfortunately, just as the number of buildings, the population of people with the same hobby as me – collecting songbirds – also increased exponentially. In addition to their habitat loss, the birds in the deep forest of Java are threatened by poaching. People always desire uncommon new species. The more unique, the more wanted! This is how many birds, which have been living safely in the deep of the forest for thousands of years, are not safe anymore…” Yudi

Next time, he will tell us about when he discovered birdwatching and how he got involved with conservation. Stay tuned!