Two weeks ago, we posted the first part of Yudi’s story (read it here if you missed it).

Today he talks about his hobby: birdwatching. 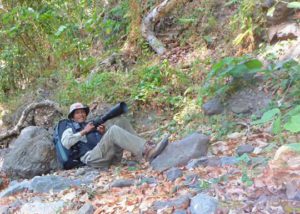 “I started birdwatching in 1998, influenced by a campaign on saving Javan sparrow, conducted by one of the Indonesian birdwatching clubs. My reason was simple: I love birds! But I haven’t had the space and the time to breed them since I started college. So, enjoying the songs of wild birds was an alternative for me.

Having birdwatching as a hobby, made me think about many things. As a student in Biology Faculty, I learnt about taxonomy, histology, reproduction, ecology, etc. But above all, the most interesting subject was conservation. I started realizing what would happen if people kept catching them and there were no more left in the wild. I also joined a Nature-lover organization, so I explored the jungle many times and as a bonus saw hundreds of bird species.

Together with other members, we started to promote birdwatching as part of the organization’s programs. In the beginning, we were involved in a campaign to save Javan hawk-eagle, that is believed to be our national symbol: Garuda. During this campaign, we met some people working for bird conservation in Jogjakarta and Bogor. They agreed to mentor us in developing our capacity in wildlife conservation, especially for birds.

In the meantime, we also had good relationships with local people in Mount Slamet – Central Java, where we were having frequent activities. These people’s lives depended on the forest, including poaching birds. They taught us how to recognize the species from their vocalizations, about their behaviour, their natural food, even how to catch them, etc. Although I was starting to have a different perspective on how to love birds, I have had a good relationship with most of them, and still do today.

Fortunately, I had an opportunity to work in wildlife conservation in Indonesia.

I joined Copenhagen Zoo to work in Baluran National Park, East Java, and try to save some Endangered species such as Banteng, Javan leopard, Javan dhole, Javan warthy-pig, Green peacock etc. Another one is the songbird Grey-backed mynah. Even though we work in the natural habitat of 80% of its population, this species is currently Critically Endangered. It is truly a big challenge, but this is the fact we must face.

I have seen many songbird species go locally extinct in the place where I started birdwatching. In the early 2000s, I could see poachers were still catching Orange-headed trush, Chestnut-capped trush, Greater leafbird or even Hill blue-flycatcher. These birds were caught the most because of the high prices they could be sold for. As a citizen of Banyumas, the city where I live, I am really proud that the scientific name of the Hill Blue-flycatcher (Cyornis banyumas) refers to our city. However today we almost never see these birds in Mount Slamet anymore…”

Next time, he will tell us what he does to help wildlife conservation. Stay tuned!