Many are aware of the approaching environmental conferences, particularly the UN Climate CoP27 and perhaps at least heard of the CBD UN Biodiversity CoP15 to be held in December, but only few will know the CITES CoP19; a crucial meeting for wildlife conservation that will take place fron 14 to 25 November 2022 in Panama City, Panama.

CITES stands for the Convention on International Trade in Endangered Species of Wild Fauna and Flora. It is a global policy framework to fight the extinction crisis through the regulation of international wildlife trade. The intergovernmental policy convention seeks to ensure the sustainable use of wildlife and the conservation of wild species which are threatened by trade.

CITES protects around around 38,700 species, including roughly 5,950 animals and 32,800 plants. Protected species are listed in one of three Appendices (I, II or III), with Appendix I having the strictest regulations. CITES has 184 signatory countries, called Parties. Every two to three years these Parties collectively meet to review the progress of species conservation, amend CITES regulations and review the challenges and successes of implementing the Convention. These so-called Conferences of the Parties (CoP) covers a wide range of topics, from general policy to more specific species issues.

The Silent Forest Group will be joining the CoP19 in 2022 as part of the EAZA delegation in the role as an Observer NGO. We strongly support the better use of CITES for increased protection of songbirds and during the event we will be actively advocating for this.

At each CITES CoP, Parties can propose adding species to be listed in, removed from or shifted between the CITES Appendices to ensure there is sustainable trade. Each of the 184 Parties reviews these proposals and decides if they support or oppose them. At this year’s CoP19 there are 52 proposals to be decided upon in a majority vote election.

At CoP19 there are two proposals concerning songbirds both of which are firmly supported by the Silent Forest Group:

In addition to the species proposals at the CITES CoP, discussions also take place to review strategic matters (such as reports from the specialist committees or a review of CITES work, interpretation and implementation matters, significant trade reviews or reports on wildlife crime and illegal trade and species-specific matters.

At the CoP19 side events are important avenues to advocate policy.

The title of the side event will be “Silent Forest – Songbird Trade”. It will take place on 23 November from 7-9 pm in the Panama Convention Center 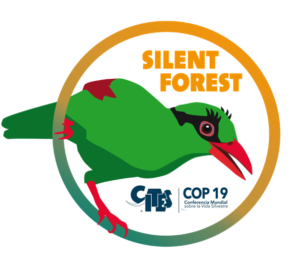 The aim of our joint side event is to share information with CITES Parties and Observer organizations on matters of songbird trade and to create an opportunity to meet and discuss songbird trade-research and conservation with a focus on:

Nearly all species of birds of prey, falcons, owls and parrots are listed in CITES. However, our data show that more species of songbirds are traded internationally than all these other groups put together. Yet only 1.4% of the songbirds species are CITES listed.

A CITES listing means access to real quantifiable trade data which will enable the assessment of the sustainability of international trade the analysis of regional trade patterns. This is especially imortant for species whose survival are known to be threatened by trade and for which there is also evidence of international trade.

The large number of songbird species is challenging and some species are similar looking which may result in misidentification by the authorities or organizations tasked with their protection or cause data gaps.

Resources developed by NGO’s and a network of species experts can help identify priorities and solve species identification challenges. These resources are available for authorities.

Our call for better protection of songbirds is linked to the CBD 2030 targets, the State of the Worlds Birds Report 2022, the IUCN Motion 120 on Action Against Songbird Trafficking, the BirdLife International Global Review of Bird Trade, and the Species360 Conservation Science Alliance Songbird Species Knowledge Initiative.

BirdLife International et al.: Inf Doc: REPRESENTATION OF SONGBIRDS IN THE CITES APPENDICES AND THEIR PREVALENCE IN TRADE