The overexploitation of songbirds for the pet trade and singing competitions in Indonesia has involved the near-disappearance of two bird species endemic to Java’s montane forests, the Javan Green Magpie (Cissa thalassina) and Rufous-fronted Laughingthrush (Garrulax rufifrons), both of which are (a) classified as Critically Endangered on the IUCN Red List and (b) subject to intensive but small-scale captive-breeding programmes (led by EAZA’s Threatened Asian Songbird Alliance) to ensure that, if the species become extinct in the wild, populations are still available for reintroduction. The magpie has been recorded from a total of nine disjunct montane forest areas, while the laughingthrush has been recorded from the same nine forests but also three others.

Many of these forests have not been surveyed in the past half-century, although recent analysis of satellite images at Manchester Metropolitan University shows that all still exist (in varying degrees of condition). However, further analysis also shows that another eight forests (i.e. 20 in total) exist and require investigation. Such investigation is necessary for several reasons: first, it is vital to discover whether (and in what numbers) the two species survive in any of the forests, and second, if the species are gone, we need to determine how suitable the forests are for reintroduction purposes. Moreover, there are many other threatened species in West Java’s forests, including three primates, that also require urgent assessment and can be targeted during the survey work. 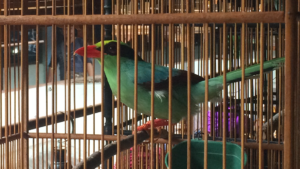